Platelets — One trillion defenders in our blood.

Welcome to plateletMAP™, an interactive site where you can learn about platelet interactions and functions in the body, ask questions, contribute knowledge and build a network!
Did you know that you can learn how to take care of your platelets so they can take care of you? The more you know about platelets the better life style choices you can make to protect your platelets so they can protect you.

Start with the body

A person has typically 1 trillion platelets circulating in their blood.

This is based on an average blood volume of 5 liters and an average platelet count of 200,000 per microliter.

Platelets are innate immune cells1 which means that they are our first line defenders against foreign substances or pathogens.

Platelets are also hemostatic/clot forming cells which means they prevent and stop bleeding by filling holes in blood vessels.

When platelets perform their immune and hemostatic functions they use cellular mechanisms known as platelet activation.

Start with the map

Platelets are produced by cells in the bone marrow called megakaryocytes. By default, platelets are created in their resting state and are called resting cells or discoid cells.2

Platelets are a mammalian specialty. They evolved and specialized from amebocytes (e.g., horseshoe crab) to thrombocytes (e.g., bullfrog) to serotonin-containing thrombocytes in warm-blooded animals and finally, platelets in mammals.3

Both resting and activated states of platelets are natural and necessary when platelets fulfill their roles as immune cells and hemostatic cells.

Platelets perform differently in blood vessels, and in communication with other immune cells in the spleen and liver, depending on their activation state.

Suspended in blood — Platelets reach all parts of the body.

1
Megakaryocytes produce platelets in the bone marrow.
2
New platelets take up serotonin which is produced in the gut.
3
Platelets stop bleeding and defend the body against foreign substances and pathogens.
4
Activated platelets are removed in the spleen or in the liver.

What is platelet activation?

PLATELET ACTIVATION IS A NECESSARY DUALISM.

Platelets activate in response to stress.
When platelets activate they change their shape, their surface characteristics (they express markers like CD62P, CD40L and Fcγ receptors), and fragment into microparticles.

By releasing microparticles or substances such as serotonin, platelets communicate with other cells or parts of the body.
All of these changes can be measured to determine the activation state of platelets.

WHAT LEADS TO PLATELET ACTIVATION?

Platelets are extremely sensitive and activate at temperatures below 30°C and above 42°C, and in response to high shear forces, pathogens, and many chemicals.

This is necessary for their role as defenders of the body. Wounds, stress and leaky gut lead to platelet activation.

Platelets in the blood of patients suffering from depression are highly activated and contain only half the normal serotonin level—could there be an association between leaky gut and depression?

What happens in different parts of the body?

Platelets are produced by megakaryocytes.

MK • Platelets are cytoplasmic fragments of megakaryocytes (MKs).
• MKs are large polyploid stem cells in the bone marrow.
• One MK can make 2-3,000 platelets.
poiesis • Thrombopoiesis is the process of platelet formation.
Dense-gr• Dense granules are storage organelles for serotonin, ATP, ADP, phosphate and calcium.
• Serotonin is not present in newly produced platelets.
TPO• Thrombopoietin (TPO) is a chemical produced by the liver and kidney.
• It stimulates MKs to produce platelets.
Rest-pl• New platelets have the discoid shape of resting platelets.
• They are fragmented off MKs without nucleus and serotonin.
• New platelets contain all granules such as α‐ and dense granules.
• Platelets are unique to mammals.
Gut Blood Vessel Spleen & Liver Body plateletMAP™

Serotonin is produced and released for platelet uptake.
Animals—including humans—cannot make tryptophan, the precursor of serotonin, but have to ingest it with plant food.

mbiota1• Microbiota refers to all bacteria, viruses and yeasts living in the intestines.
• Microbes inform the immune system.
dysb• An imbalance of bacterial species in the intestines is called dysbiosis.
• Dysbiosis can follow antibiotic treatment.
• Dysbiosis is associated with low serotonin production.
5HT-rel• Some gut microbes produce serotonin.
• Others stimulate enterochromaffin cells to produce and release it.
Ent-c• Enterochromaffin cells in the intestinal wall are specialized in serotonin production.
• The aminoacid tryptophan is the precursor of serotonin, 5‐hydroxy­tryptamine or 5‐HT.
5HTrel2• Dysbiosis can cause low serotonin production.
5HT-up• Platelets take up serotonin mostly through the serotonin transporter (SERT).
• Selective serotonin reuptake inhibitors (SSRIs) block serotonin uptake.
• SSRIs affect platelets and their function.
CD62P • CD62P is an activation marker.
• In resting platelets CD62P is part of the α-granule membrane.
• During activation and α-granule release it comes to the cell surface.
microp• When platelets activate they shed microparticles (MP).
• Microparticles communicate with other parts of the body.
• Example: MP shed by tumor-informed platelets are associated with metastases.
sCD40L• Soluble CD40L is released during platelet activation.
• High plasma sCD40L is an indicator of inflammation.
Fcg• Expression of FcγRII on the surface of activated platelets is part of the innate immune response.
• FCγRII signals to macrophages that the platelet should be removed.
pl-act• Platelets are innate immune cells.
• Platelets are the first line of defense against foreign substances in the blood.
• Platelets communicate through the changes occurring during activation.
leak• Intestinal hyperpermeability is known as leaky gut.
• Leaky gut allows for allergens and pathogens to cross from the gut into the blood.
Gaps• Serotonin is one of the chemicals that keep the gut wall tight.
• With dysbiosis and serotonin deficiency gaps in the intestinal lining cause leaky gut.
Bone Blood Vessel Spleen & Liver Body plateletMAP™

Platelets recognize wounds and defend us against entering pathogens.

Activated platelets are sticky which can lead to thrombosis, heart attack, stroke, and other cardiovascular problems.

hem• Hemostasis means to stop bleeding.
• Platelets are specialized to recognize wounds, adhere, aggregate and release intracellular content.
Bleed• Patients bleed if platelets are not functional, i.e.,fail to
‐ adhere (Bernard-Soulier syndrome),
‐ crosslink with each other (Glanzmann Thrombasthenia)
‐ or release (storage pool diseases like Hermansky-Pudlak syndrome);
• or have thrombocytopenia.
Bact• Wounds are entry sites for pathogens like bacteria and viruses.
• Platelets are the first line of defense.
• Platelets engulf viruses and interact with bacteria.
immun• When platelets interact with pathogens they activate.
• Plasma proteins like complement factors or immunoglobulins bind to their surface.
• This "opsonization" signals to macrophages to remove these platelets.
thromb• Thrombosis is the formation of a blood clot.
• Platelets respond to damage in a blood vessel wall in the absence of bleeding.
• Overdosing of anti‐thrombotic drugs can cause bleeding.
Inf• When platelets are chronically stressed they will stick to wounds more readily.
• Consequently, fewer platelets are available for defense.
Endo• The layer of the blood vessel wall that faces the blood.
• Resting platelets don't normally adhere to intact endothelium.
Col• Collagen of the vessel wall is usually covered by the endothelium.
• Platelets recognize unusual substances such as subendothelial collagen exposed in a wound.
pimmun• If platelets are consumed by thrombosis the innate immune response will be poor.
• Chronic conditions like irritable bowel syndrome (IBS) could increase the risk for both thrombosis and systemic inflammation.1
Bone Gut Spleen & Liver Body plateletMAP™

Phagocytosis• Phagocytosis is the process by which macrophages "eat" platelets.
• Conditions with chronic platelet activation can lead to thrombocytopenia (low platelet count) and splenomegaly (large spleen).
Macrtophage • Macrophage means big eater.
• These cells are found in the spleen and the liver.
• Macrophages remove activated and old platelets.
HPA• Human platelet antigens (HPA) are on the surface of all platelets and required for adhesion and aggregation.
• Conformational changes during platelet activation might make them antigenic, i.e., marked for attack.
MP-s• Microparticles are also known as exosomes or extracellular vesicles.
• Platelet MPs are abundant in blood of patients with autoimmune and inflammatory conditions.
• MPs from tumor-informed platelets may be associated with tumor progression.
fever• Platelet serotonin (5-HT) is involved in body temperature regulation.
• 5-HT is a vasoconstrictor, vasodilator and pyrogen.
• Serotonin-mimetic drugs like Ecstasy (MDMA) affect body temperature regulation.
CD40L• In response to pathogens platelets release CD40L.
• High levels of soluble CD40L are associated with carcinoma lesions.
Fcgam• FcγRII expression and other changes in the outer membrane of platelets signal that activated platelets should be removed from the blood.
• Macrophages in the liver called Kupffer cells remove platelets activated by cold temperature.
• This process involves FcγRII.
LPS• During infections, blood levels of interleukins and lipopolysaccharide (LPS) are elevated.
• Macrophages in the spleen are stimulated by these substances to remove activated platelets.
• After platelets engulf viruses like Dengue they are removed in the spleen.
MHC-II• MHC stands for major histocompatibility complex.
• Macrophages combine ingested foreign proteins with the MHC class II on their cell surface.
• This is called antigen presentation to other immune cells.
TGFb• Platelets release TGFβ during activation from their α‐granules.
• TGFβ is an inhibitor of T cells and blocks the adaptive immune system.
Tcell• T cells are special white blood cells of the adaptive immune system produced in the thymus.
• TGFβ can inhibit T cells to recognize cancer cells.
CART• CAR stands for chimeric antigen recepter.
• CAR T cells are laboratory modified T cells that have ,relearned, to fight cancer.
Tpenia• Thrombocytopenia means low platelet count.
• A normal platelet count is 150,000‐400,000 per µL.
• Causes for thrombocytopenia are bone marrow failure, inflammation, thrombosis or blood loss.
cancer• Platelets activate when interacting with tumor cells.
• Tumor-informed platelets shed microparticles which contain tumor information.
IgG• IgG stands for immunoglobulin Gamma which is the most prevalent class of antibodies.
• The adaptive immune system uses antibodies to build memory.
• This allows a faster response to the same or similar pathogen in the future.
T-inhib• The immune system is tightly balanced between pro-inflammatory and anti-inflammatory strategies.
• Certain interleukins like IL-10 and IL-12 and other cytokines limit the immune response.
spleno• Splenomegaly is an enlarged spleen.
• Thrombocytopenia and splenomegaly often occur together.
• The association may be due to increased phagocytosis of platelets due to chronic infection.
Bone Gut Blood Vessel Body plateletMAP™ 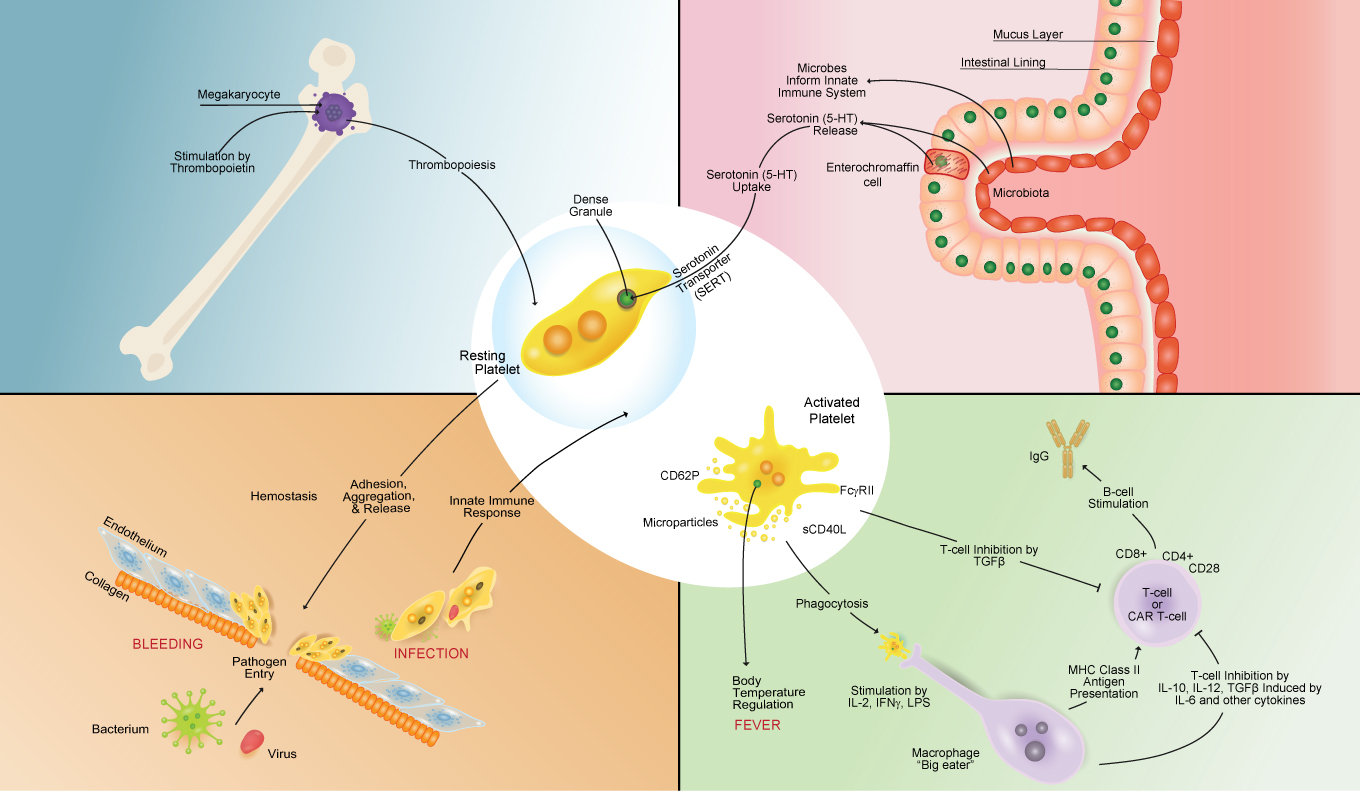 No disturbance in the body — platelets remain in their resting state.
Platelets are ready to respond to infections.
@dr_emaurer
Share your thoughts 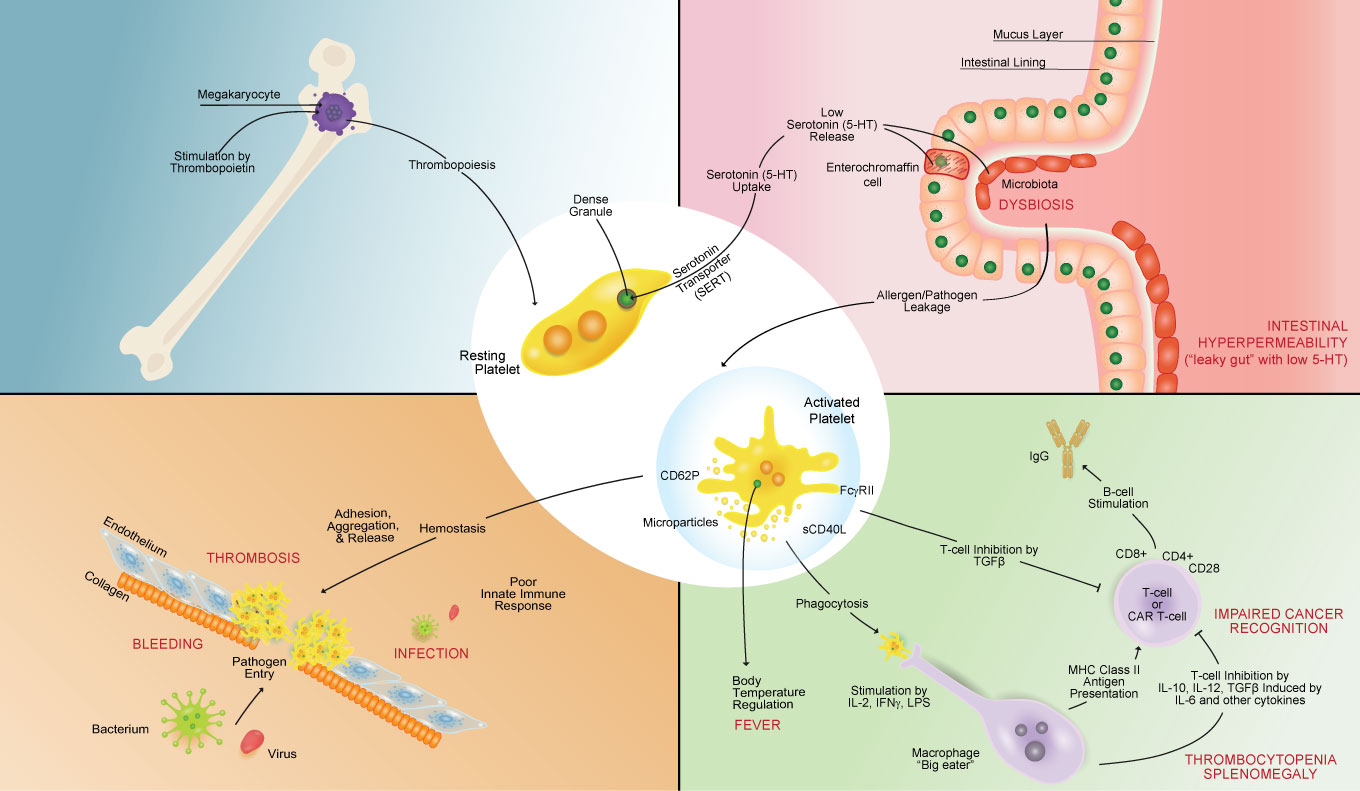 Disturbance in the body—e.g., leaky gut can lead to platelet activation.
Platelets are sticky and clot faster but they are inefficient immune cells.
@dr_emaurer
Share your thoughts