Why are they called blood platelets?

If you ever looked at platelets under a microscope chances are that they looked nothing like platelets. They probably looked more like spiky balls. Spiky they were when I got introduced to them—at the beginning of my PhD in 1988. The question "Why are they called platelets when they look like this?" started a lifelong passionate quest for answers, leading to plateletMAP and many more questions.

When I started my platelet research I followed an established protocol: I collected blood in sodium citrate, centrifuged the blood, and removed and fixed the platelet-rich plasma. I performed all steps at room temperature. Dr. Pfeiler, an expert in electron microscopy, helped me "see" platelets when I started to work with them. We were appalled by the sight of the first images of washed and fixed, "resting" platelets. What had I done to them?
During my chemistry undergraduate and my master's in physical chemistry I did not learn a lot about platelets. I really had no idea what had happened that they didn't have a discoid and smooth shape. I started digging in the literature and found Guilio Bizzozero's paper published in 1882 showing hand drawn discoid platelets as they closed a wound.1

It took months of learning with Prof. Gustav Born and Sir John Vane and their teams in London, UK, reading many papers and performing many experiments to learn that platelets are very temperature sensitive—with sodium citrate as anticoagulant they activate already at room temperature! Much stronger anticoagulants like acid citrate dextrose (ACD) are required to prevent the temperature activation of platelets. ACD reduces the pH and captures much more calcium than sodium citrate alone. As blood bankers know, even with the strong anticoagulants used in platelet transfusions, platelets will activate when kept in the fridge, i.e., at 4°C.2

The high concentration of a calcium-binding component like sodium citrate prevents blood from clotting and platelets from activating. The protons from citric acid that cause the low pH of strong anticoagulants keep platelets busy dealing with this imbalance because it is absolutely necessary to maintain the intracellular pH. Thus, strong anticoagulants "distract" platelets from responding to stress like low temperature.3 The temperature sensitivity of platelets has practical consequences. Platelets for transfusion need to be stored between 20-24°C rather than 4°C in order to prevent stress from cold exposure. 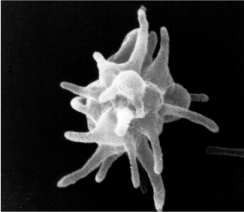 "The spiky platelets are activated platelets—the weak anticoagulant I used did not prevent them from sensing and responding to low temperature stress."

But why would platelets be so temperature sensitive? Other cell types like red blood cells don't mind being refrigerated—so why platelets?

Interestingly, platelets activate at low but not at high physiologic temperature as they tolerate up to 42°C without morphological changes.4 This is also unusual compared to other cells. Such striking anomalies don't happen without reason and indeed, a link to body temperature regulation exists.

I first hypothesized that platelets might be involved in body temperature regulation when I learned that they carry all circulating serotonin.5 Serotonin is a neurotransmitter and one of its functions in the brain is temperature regulation. Then I found the book "Comparative Hemostasis in Vertebrates" by Jessica Lewis with most beautiful transmission electron microscopy (TEM) images of thrombocytes and platelets.6 Reading this book I made an interesting observation—cold-blooded animals did not seem to have dense granules, the storage organelles for serotonin. These granules also contain calcium which is electron dense giving dense granules their dark, "dense" look in TEM.

It took many years of collaborating with biologists and testing blood samples from various animal species to support that circulating serotonin and warm-bloodedness seemed to have evolved together.7 I did not find serotonin in thrombocytes of fish and reptiles—cold-blooded species that evolved before the divide 310 million years ago. At that time the world was hit by a climate crisis. We will never know for sure but maintaining a higher body temperature that could be controlled independent of the environmental temperature became an advantage. Sea turtles, birds and mammals acquired this trait.

Another interesting observation is that—as far as we know—all life on earth uses serotonin which evolved very early in response to high oxygen concentrations in the atmosphere.8 There is no known organism without serotonin in their neuronal system or brain but circulating serotonin appeared only with warm-bloodedness.

It seems therefore very reasonable that the cells that carry serotonin in mammalian blood should be sensitive to temperature changes.

My initial protocol of isolating and fixing platelets at room temperature resulted in activated platelets. Once I understood that temperature sensitivity was a natural response of platelets I kept them as close to 37°C as possible if I wanted to get images of resting platelets.

It certainly makes sense that a vasoactive substance, a chemical that can induce the contraction or dilation of blood vessels, would be involved in body temperature regulation—the change in skin blood flow is one of the most noticeable signs of adaptation to hot or cold temperature for someone with fair skin. Temperature sensitivity of the cell that carries this substance is a natural requirement.

After 30 years of platelet research I am still intrigued by their temperature sensitivity. I wonder what happens to my platelets, the trillion defenders that keep me well, when I am in a Scandinavian Spa going back and forth between hot and cold tubs. I wonder why extreme temperature exposure has been integral in many traditional cultures from First Nations sweat lodges to Kneipp baths. I also wonder what role platelets and their serotonin play in the Wim Hof Method.9

Do you have answers, comments or a story of your own to share?

"Exposure to 42°C induces stress tolerance in platelets—subsequent cooling does not activate them. This is a widespread phenomenon called heat shock-induced stress tolerance."

More about platelet serotonin in a future blog—stay tuned!